Cyclone Rocketry returned to Spaceport America with a whole new rocket and a whole new approach to building it.

Cyclone Rocketry of Iowa State University returns to Spaceport America for the second time with their gorgeous new rocket, Nova Somnium. Standing proud at 14 feet tall and 4 inches in diameter, Nova Somnium is competing in the 30,000 ft COTS category and rocking a custom, hand-painted design.

Nova Somnium is latin for "new dream." The rocket lives up to the name, as the team has reinvented themselves along with the hardware. Photo credit: Cyclone Rocketry and Ethan Reilly.

When we asked Co-Team Leader Joe Markus about the decision to build a 30k class rocket rather than an iteration of last year's 10k rocket, he said, "The real reason why we went with a 30k rocket this year is because we felt we were ready to do it." According to Markus, the team started the year comfortable with the modelling and simulation software, and had the energy to take on something bigger. 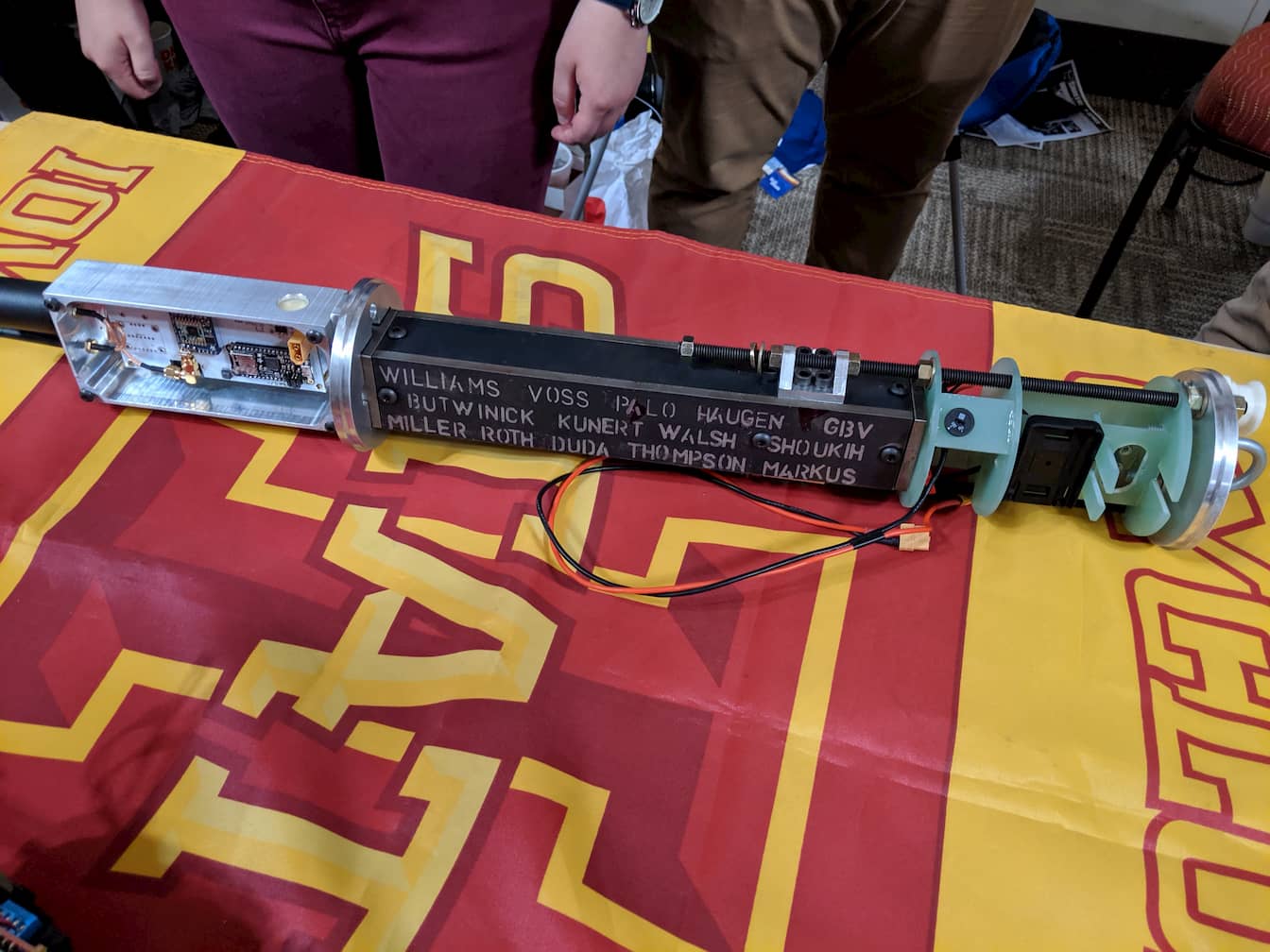 Nova Somnium will carry a functional engineering payload. An accelerometer is suspended between opposing neodymium magnets, which provide magnetic vibration dampening during flight. The team will assess the dampening performance of the payload compared to an accelerometer fixed to the rocket's avionics after the flight.

The rocket itself is powered by an O3400 solid propellant motor. This is about the same size motor used by its predecessor, INVICTUS I. Nova Somnium's smaller diameter body has less drag, allowing it to go supersonic and get up to its 30,000 foot target altitude for about the same impulse.

But that's about where the similarities between Nova Somnium and INVICUS I end. Nova Somnium is a "min OD" rocket, which is shorthand for saying that the rocket airframe is only as wide as the motor casing. The metal motor casing then serves as a structural member for the bottom part of the rocket. While this led to better aerodynamic performance, it meant a complete overhaul from last year's vehicle. Nova Somnium has a redesigned fin configuration including some canards near the nose, a new air brake system for altitude control, and new avionics. On top of all this, the new designs required a custom launch rail to be built by the team as well. 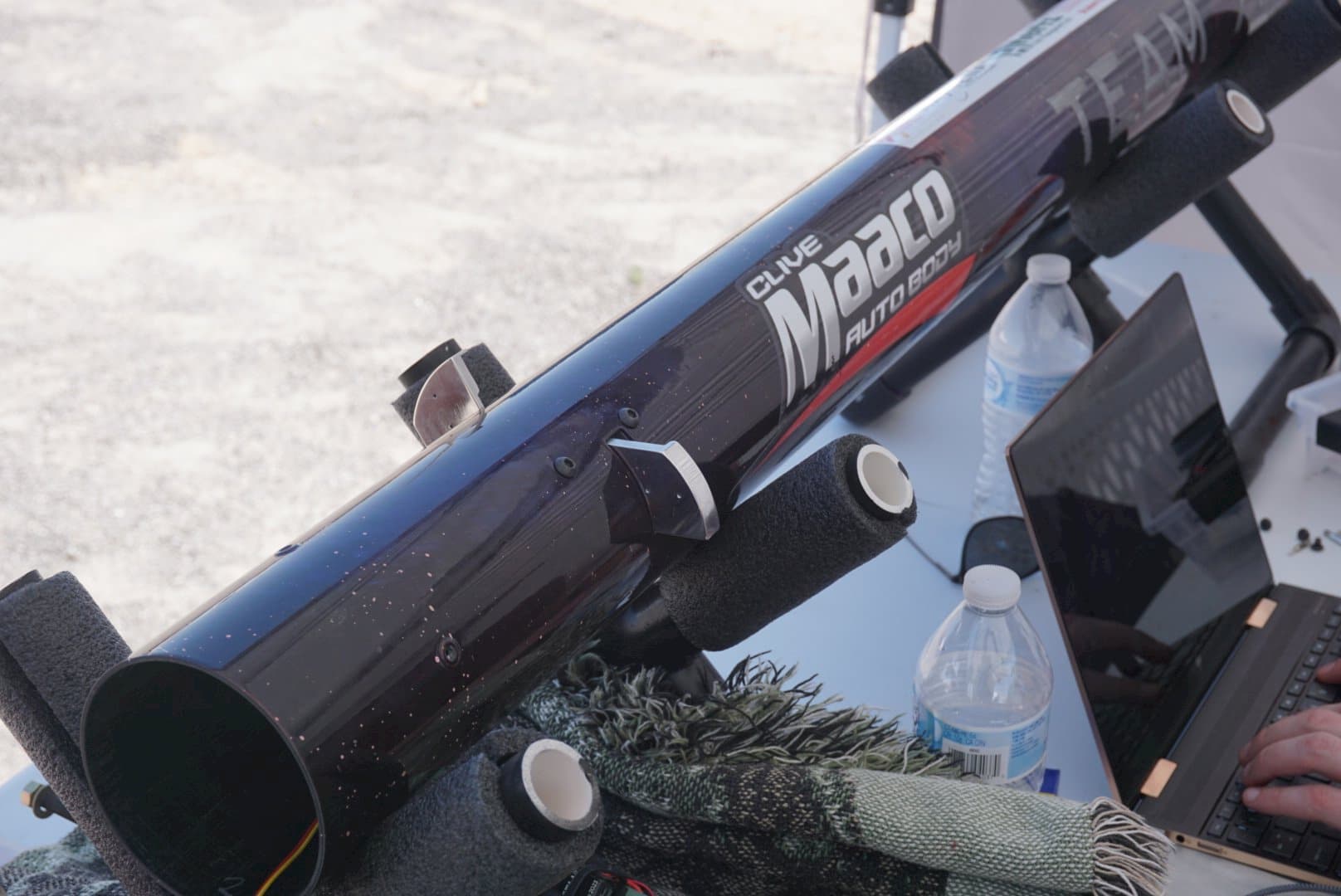 Nova Somnium is built to fly higher than 30,000 feet, but the high scores come with altitude accuracy. The team built compact aluminum plates that linearly slide out into the airstream to create just enough drag for the apogee to hit exactly 30,000 ft. Photo credit: Cyclone Rocketry and Ethan Reilly.

Where some might question a complete overhaul, Markus and his fellow team members of Cyclone Rocketry saw this as an opportunity. When the team came to Spaceport America last year it had about 20 members, and by the next academic year it had grown to about 100, not to mention a good number of the founding team members had graduated. So Markus and the executive team gave the whole organization a redesign too. "A lot of our members had no [prior] experience, some had never touched a model rocket before. They all come from different backgrounds." Cyclone Rocketry's solution was to break the group down into smaller teams for each task. Members with less rocketry experience went on to build the launch rail and ended up working with the high-powered rocket team in a psuedo customer-supplier relationship, learning through osmosis. This led to the team's growth in other colleges on the Iowa State campus such as the Department of Apparel, Merchandising and Design, which manufactured Nova Somnium's parachute completely in-house. "We structured the team in a way that's sustainable, and in a way that encourages all members to learn a lot, but at the same time ensures that we can take on as many projects that we need," Markus told us. In order to manage all these teams cohesively, Cyclone Rocketry adopted a philosophy of iterative design. "We created a timeline early, and understood that the timeline would change," Markus said. "We can all get it done by cramming at the end of the day but it's never going to be your best work."

The Cyclone Rocketry team has come to Spaceport America to improve, and it shows. But for Joe Markus, it doesn't end at the awards ceremony. "The goal is to be self sustaining--making sure we're building the skills for everybody every year. And part of that is not iterating on just one design."